Gold: the protector and creator of jobs

Some readers may ask themselves, “What has gold to do with protecting jobs? Gold hoarders are certainly not creating jobs, and hoarding more gold will not help at all.”

Let me go back to the 60’s. During those years, the US and the world were on a Gold-and-Dollar Standard.

Back in the 60’s, countries were very careful about maintaining a constant monetary balance between their exports and their imports. They all wanted to be in a situation where they would export more than they imported, so that they would have increasing balances of gold or dollars in their Treasuries.

To state this more correctly, they all wanted to export more than they imported, except the United States.

The US didn’t care very much about maintaining a balance between exports and imports, because the US was able to pay for its deficit in trade (more imports than exports) by simply sending more dollars overseas.

Many economists warned about this trend, which was accompanied by a constant loss of gold during those years; some countries, notably France, refused to hold more and more dollars. The French asked for their gold – at $35 dollars an ounce – and this caused great disgust in Washington, D.C. and New York.

Nothing was done to stop the trend. In 1971, Henry Hazlitt, a good conservative economist, warned that the dollar would have to be devalued – that it would be necessary to raise the number of dollars which would be needed to obtain an ounce of gold – some months before the dam broke and the US was faced with the need to devalue, because the US stock of gold had become much too small.

What Mr. Hazlitt never imagined, was that instead of devaluing – which was the advice of economist Paul Samuelson, Nobel Prize winner, published the week before August 15, 1971 – Nixon followed the advice of Milton Friedman and simply “closed the gold window”. The US would henceforth not deliver any gold, at any price, to any foreign Central Bank who might wish to invoke the right to redeem its dollars for gold, according to the Bretton Woods Agreement of 1944.

Since that date, all world trade – or the better part of it – is carried on in dollars which are nothing more than fiat money. Since the rest of the world’s currencies were tied to gold through the dollar, all the currencies of the world also became fiat money – fictitious money, backed by nothing. That includes the Euro, of course.

What happened after that fateful date has overturned all order and harmony in economic relationships between the nations of the world.

Countries around the world began to accumulate more and more dollars as credit expansion in the US went forward, implacably. Central Banks had to accumulate these dollars in their Reserves, whether they wanted to or not. (Not having sufficient dollars would force other countries to devalue and destroy savings. The US cannot run out of dollars, it manufactures them.)

With no loss of gold to restrain the US and force it to stop expanding credit, US imports surged and exports waned. The monetary difference was “paid” in dollars.

Free trade was extolled by the US; every country that wanted to be in the good graces of the US had to bow to “free trade”.

Free trade is a good thing – but not for a country that is providing the world’s fiat money. This “free trade” was called “globalization”, meaning that the US could, and did, buy everything it wanted in the world, in any amount, at any time, by simply paying dollars for it.

There was no restraint to US credit expansion. It was a lovely time to be young and an American.

However, free trade means you buy where it’s cheapest, and the cheapest place to buy, in recent decades, was China, South East Asia and India ; the oil required to fuel the US economy was cheap and bought with dollars which it cost nothing to produce.

Thousands upon thousands of products and floods of oil came across the oceans to the US, and also to Europe, which began to pay in Euros for some of its imports: Euros which also cost nothing to produce.

US manufacturers, facing this competition from Asia, decided to move their factories to Asia instead of waiting for certain bankruptcy by competing against much lower-cost production.

That was how the US was de-industrialized.

It happened because gold was eliminated as a limit on credit expansion and money creation. 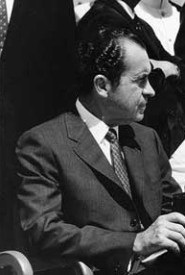 Had Nixon not gone off gold in 1971, China would have taken generations to create its industrial base. It would have been necessary for China to accumulate capital slowly, because its exports to the US would have been limited by the need for the US to pay up with gold for the amount by which Chinese exports exceeded its imports from the US.

The Chinese would have had to buy as much from the US, as they sold to the US; and since they were so terribly poor, there was not much they could have bought from the US.

Their growth would have been slower, but they would not now be facing over 20 million unemployed, as their markets dry up.

The US would never have allowed China to drain US gold from the Treasury by selling more to the US, than the US sold to China. But since payment was in fiat dollars and not in gold, the destructive effect of huge Chinese imports was not considered important by policy makers. And so, the US sailed into unemployment and had a great time doing it. Only now, that the party is over, are the grim facts visible: no jobs! Manufacturing is decimated.

The fiat dollar – unanchored to gold – was the greatest strategic gift that the US could have made to China. Now, they have a huge industrial base and the US has Oh, so little!

The damage is done. How to recover the industrial base of the US ? Not by slogans such as “Buy American”, nor by protectionism.

What is required is to recover economic balance between the nations of the world so that they all can balance their exports with their imports. This is not done by protectionism, a false remedy to joblessness.

The world needs to return to gold as the international means of payment. All imbalances must be paid, monthly, in gold. No fiat money “payment” allowed!

If a nation does not have gold to export, it must do without or manufacture what it needs, itself: there you have the clue to restoring jobs in the US and in Europe. This is not “nationalism”, it is simply good economics.

The US has to limit its imports drastically, not by protectionism and tariffs, but by returning to the Gold Standard. Jobs will mushroom in the US beyond what anyone can dream as soon as its market must buy locally or not buy at all, for thousands upon thousands of articles. A return to gold, will achieve that aim very quickly, to be sure. 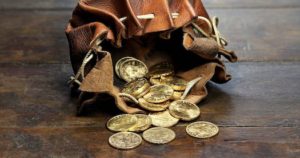 The Gold Standard is the friend and protector of the worker and of the investor, as well as the basis for harmonious relations between the nations of the world.

And by the way, the current financial disaster in the US is directly attributable to Nixon’s decision to “close the gold window”, because a monetary system based on gold is an obstacle to the criminal credit expansion perpetrated by the bankers. Gold based money puts shackles on bankers, forcing them to be careful. A fiat money system enables financial criminality – it’s as effective in restraining criminality in finance as tying up a dog with a string of sausages.

Written by Hugo Salinas Price for In This Age of Plenty ~ February 4, 2009