Extraordinary Popular Delusions and the Madness of Crowds

Such is the title of an immortal work by Charles Mackay, published 180 years ago – 1841 – in London, England.

We are in 2021, and the world is subject to a new “Madness of Crowds”. The present “Popular Delusion” of our world, in this 21st Century, is – without any doubt – its fascination with Bitcoin and its fellow “crypto-currencies”:

It is utterly useless to argue with those who are subject to the Delusion presented by Bitcoin et al. Bitcoin presents a Delusion that is impermeable to Reason.

A good part of our world, especially the “more-developed nations”, are under the spell of this delusion, thanks to the ubiquity of the Internet.

Bitcoin and its fellows, are truly technological wonders, no doubt about that.

I need not repeat all the great things said about the Bitcoin technology.

I accept their security, their confidentiality, their ubiquitous presence at any instant, wherever there is availability of Internet. All this is excellent.

Bitcoin and its fellows are related, psychologically, to Witchcraft, which had a great following in past centuries. Whereas belief in Bitcoin is a positive hope for the safe possession of personal wealth and its magical growth, the belief in Witchcraft brings with it fear and loathing. But fundamentally, they are both “Popular Delusions” – Bitcoin instils hope of monetary safety and the desire for rapid growth of personal monetary fortune, and Witchcraft instils fear of evil spirits. Both Bitcoin and Witchcraft have no relation to personal merit or personal demerit; by which I mean that with Bitcoin, you can believe yourself wealthy, without having done a stroke of any productive work or created any productive idea. And by fear of Witchcraft, you can nurse a fear which has no ground in Reality.

In order to place Bitcoin and its fellows, in the context of “Popular Delusions and The Madness of Crowds“, I present the “Contents” part of the Index to the book I mention:

8. Influence of Politics and Religion on the Hair and the Beard

So now, in this 21st Century, humanity is subject to the greatest ever of the “Popular Delusions and The Madness of Crowds” registered over the past thousands of years.

Technically, Bitcoin and its fellows are marvels of technology. But as far as humanity is concerned, they are nothing more than Delusions accepted by the Madness of Crowds.

Bitcoin and its fellows have granted a monetary value to the possession of these electronic digits – because that possession protects the owner of a Bitcoin, or of a tiny part of one Bitcoin, from theft.

OK: So a Bitcoin worth say – $50,000 US Dollars – is yours, only yours and cannot be stolen from you. And your Bitcoin may be worth even more, much more, in the near future. What’s to object about that?

The BIG QUESTION, which is never mentioned at all, is “What is the worth of what the Bitcoin is worth?”

I demand a clarification: “Define a US Dollar, or any other currency in existence in the world today.”

The correct reply would be: “A US Dollar is an electronic digit, created in the US, by an institution called the “Federal Reserve Bank of the US of A.”

All other currencies are created in the same way, by the Central Banks of their respective countries.

All “money” in the World today, is nothing more than electronic digits! 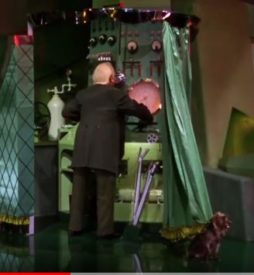 L. Frank Baum, author of “The Wizard of Oz” describes a scene in his book, where Dorothy and her companions, the Scarecrow, the Tin Man and the Cowardly Lion, are spectators of an impressive scene at a theatre in the Emerald City of Oz, when suddenly Dorothy’s pet dog, Toto, pulls aside a curtain which hides the Great Magician, who is pulling ropes and wires to present a frightful scene to the newcomers to Oz. Toto reveals it was all a FRAUD!

I attribute value to a good cup of coffee, to a good lunch, to fine clothes and ten thousand other things. But I just can’t bring myself to value an ELECTRONIC DIGIT, whose value does not relate to something tangible at all. Nor does the fact that millions of others DO value an electronic digit and are willing to part with Dollars (themselves only electronic digits) inspire any desire at all, on my part, to “own” such an impertinence as a Digital Bitcoin.

And – Pray tell! – what happens to the thousands of Dollars which a Bitcoin is supposed to be worth, the day that the Federal Reserve goes “Belly-up” and ceases to exist? And further, when the Dollar collapses, as it most certainly will, all other currencies in the world denominated in Bitcoin will be worth exactly NOTHING, as the Dollar is the currency that underpins all other currencies – The Russian Ruble and the Chinese Yuan perhaps excepted.

Someday, a book will be published, on the subject of “The Greatest Popular Delusion and the Madness of Crowds Who Believed in the Bitcoin Myth.”