Garrison: A Nickel for Your Thoughts? 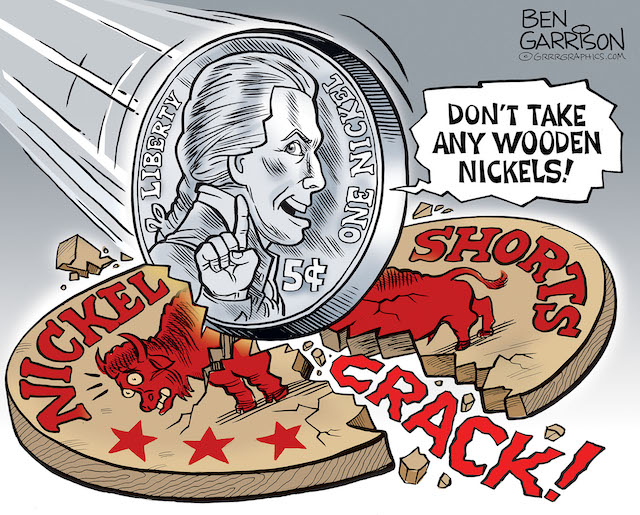 Once upon a time, America’s money was based on real value that could be held in one’s hand. A dollar is still defined in the Constitution as a silver coin containing 371.25 grains of pure silver. Gold and silver coins or currency backed by gold and silver were the only legal tender.

Fiat money notes were forbidden. When our country was founded, a solitary cent (commonly called a ‘penny’ today) was a substantial slab of solid copper. (Today a cent is zinc disc with a thin layer of copper on the outside.) A nickel, also known as a ‘half dime’ in the 1800s always had some copper in it. During WWII there was a nickel shortage and so the nickels were actually 35 percent silver and the rest copper.

How things have changed. Money has become a sad parody of its original forbears. Our money has, in a way, become wooden nickels. We have been swindled. Congress illegally turned over its right to regulate money over to private, globalist bankers. The Federal Reserve now prints currency like madmen. It benefits the billionairiat—you know, the people at Davos. The WEF. The oligarchy that owns the central banks and the Federal Reserve. Their currency doesn’t even have to be printed. It can be created electronically and it’s backed by nothing but debt. It has allowed us to be ruled by an unelected cabal of globalist tyrants. It has turned our citizens and future generations into slaves.

What does this all have to do with today’s nickel, you may ask? Our five cent coin is now worth a dime, thanks to its nickel content. To be sure, nickel is considered a commodity just like silver. The latter precious metal was stripped from our coins under the Johnson administration. Will they remove the nickel from our nickels? They already did that during WWII. A nickel shortage forced the US Mint to coin the nickels using mixture of silver and copper. That won’t happen again. More likely our nickels will become zinc discs. If they do that, why have cents or nickels at all? The pesky change would be nearly worthless, but they’ll continue to inflict the annoyance on us because the globalists are also sadists. They love making a mockery of our formerly real money.

Recently nickel prices doubled. A Chinese bank built a massive nickel short position and it blew up on them. They couldn’t cover. The London Metal Exchange (LME) halted trading to sort things out. It’s all being papered over now, but it shows you what can and should happen when real money gets suppressed.

We’ve seen silver prices rigged by the central banks for decades. There was a glimmer of hope for silver back in 2011. It was said that JP Morgan was in deep trouble with their derivative short positions on silver. If silver eclipsed $50 per ounce (and it looked like it would) JP Morgan could have gone under. Of course, the banksters weren’t about to allow that to happen. Instead, they collusively and illegally shorted massive amounts of silver that didn’t exist. The price collapsed back down to $13 a few years later. Many of of stackers thought we’d get rich by means of silver. Instead, we got crushed. JP Morgan had to pay a fine later one, but big deal. They and Goldman Sachs have access to a printing press. As it turned out, Bitcoin was the place to be. The latter was not ‘riggable’ by the central bankers.

A friend said he was going to hoard five cent coins because of the value of the nickel inside. The metal value is higher than That sounds like a great move, but how does one sell a nickel coin for its nickel content? A nickel coin is 75 percent copper and 25 percent nickel. It’s worth a dime, but if ones spends it they will only receive the printed face value, just like a monetized silver coin. It clearly says “ONE DOLLAR” on a Silver Eagle, even though any coin store will charge you for the silver content along with a hefty premium. Take it to a bank or spend it at a supermarket and you’ll get one buck for it if they accept it at all. Try telling the IRS that your silver is only worth its stated face value—they will insist you pay the investment value. They’ll say your Silver Eagle is worth the metal content, not the face value. The tyrants want it both ways. What a wicked web was weaved when we abandoned constitutional money.

We can try melting our nickels down, but that would require a smelter. Who knows how much that would cost, so for now the metal value in a nickel coin will go unrealized.

As for the price of silver, one can only hope we’ll see another dramatic rise, but right now the shorts are still in control. When it comes to precious metal, paper covers rock. Federal Reserve paper cannot cover Bitcoin, however. That’s why our political puppets are so eager to remedy that situation.

[Got physical… close at hand?]

Call Jeffrey Bennett (Kettle Moraine, Ltd.) who has over 63 years experience in the precious metals markets – first as an investor and subsequently – with over 30 years as a respected member of the industry for guidance and assistance with your needs.

Also, he invites you to tune in to and experience his 26 years of broadcasting with his daily program, The Edge of Darkness at 8:00 p.m. (Eastern Time), each Monday through Friday on Republic Broadcasting Network. – and in addition to educational commentary regarding YOUR financial health and welfare, you will be introduced to a wide variety of subject including YOUR physical well-being and health, your Education (about many topics) … and sometimes just a bit of much needed satire.

Please allow me to introduce myself; I am Jeffrey Bennett, President of Kettle Moraine, Ltd., the parent of Sierra Madre Precious Metals. I have been married for 52 years with two children and four grand-children, a veteran of Viet Nam, student of history (both American and film), and was host for fifteen years of Perspectives on America on the alternative airwaves, covering such subjects as, health and wellness, news, political satire, education and editorial commentary on current events through the teaching of history, and Protecting Your Wealth. In early 2018, I took a several month hiatus to complete some family business but returned to airwaves April 17, 2018). At the age of ten, I sat in a bank-vault in the Citizens Bank of Mukwanago, Wisconsin with my grandfather going through bags of old American Peace dollars, hand-selecting each coin as dated rolls of 20 coins were carefully put together and rolled. Learning of the history of these beautiful pieces of Americana, I asked my grand-father, "Why are we doing this?" to which he replied, "Because someday they are going to do the same thing with the silver in our money that, that (S.O.B.) Roosevelt did with gold in 1933." It took only six-years for his prediction to come to pass at the hands of a disciple of Roosevelt's... and what will a Federal Reserve 'dollar' purchase today - and what will that old 90% Silver Peace Dollar purchase? Although at the age of ten, there was little understanding of the meaning of it all, over the next half-century I became well-versed on the subject matter. During this summer of my education, I began to purchase silver coins as a collector and some small, international gold coins two years later - not an easy feat in the shadow of the Roosevelt confiscatory policies of 1933. Although those policies remained in effect until the mid-1970's, it was not until 1991 that I found that one could make a living providing precious metals and collectible, historic numismatic coins to a willing and concerned clientele. It was also during that year, that I began a relationship with one of the first Trust companies to give the public access to gold and silver as part of an Individual Retirement Account (IRA) - and Kettle Moraine, Ltd., founded in 1995, but have ceased providing service due the the intense change-over of the provider. In November 2011, after a 15 month broadcast on another network, I returned to the airwaves with my then revamped program, Life, Liberty & All That Jazz, and for over a quarter-century, I have been proud to serve the family of listeners of my numerous broadcast programs for physically-held precious metals for investors and collectors alike. On March 23, 2020 I launched my brand new - appropriately named program, The Edge of Darkness on the Republic Broadcasting Network, and thus continue to  remain available to our long time clients and their families. Ah yes - find out what "inter-generational" wealth provision has done for our clients over the past three decades. Don't buy the sizzle of that steak until you understand the cost! In other words, don't buy the bull being dispensed by the 'rare coin' pitchmen until you understand the full story. We, at Sierra Madre Precious Metals, will be proud to serve your needs.
View all posts by admin →
This entry was posted in Let's Get Physical. Bookmark the permalink.