The Legend of Jacque Dupré 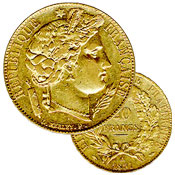 At the end of World War I, in the year 1918, Frenchman Jacque Dupré inherited the equivalent of $325,000.00 American dollars. Dupré used his inheritance wisely by converting it all into French, 20 franc gold coins. Each day for the rest of his life Monsieur Dupré spent the total sum of one gold coin to meet his needs  food, clothing, shelter, entertainment and medical.

Some years after his acquisition, French tax authorities performed the first of what would be many audits on Dupré. The authorities could discover no means of income  no bank accounts nor visible assets  and yet  their victim  the innocent Monsieur Dupré obviously lived quite comfortably in his modest Paris apartment.

Over the course of the following fifty-plus years the authorities would repeat their tyrannous efforts toward Dupré every few years  each time to no avail  and whether through inflation, deflation, recession, depression, peace-time or war, Dupré spent no more than one gold coin each day until he died.

~ Time passes ~
Although nearly sixty years had passed since Jacque Dupré had invested his fortune in those gold coins, he had spent but half of them by the time he died  but the final surprise was about to be discovered by his nephew.

Several weeks after Duprés passing, his sole heir, André was clearing out his Uncles old apartment and discovered the trunk which had held the secret for over six decades  the remaining cache of gold. Just under half of the original fortune remained  and yet its value now exceeded two-million dollars, American. 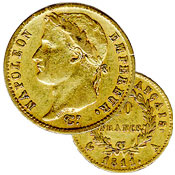 ~ Lessons Learned  and Fortunes Remain ~
The fortune, which began valued at $325,000 was depleted by just over half the original number of 20 franc gold coins. Those that remained were now worth in excess of two-million dollars.

Take a lesson from the legacy Jacque Dupré left his only heir  the power of inter-generational wealth provision. It remains available – even today!

Some of the French 20 franc pieces being offered in our catalog may have been a part of his treasure.

Call Jeffrey Bennett (Kettle Moraine, Ltd.) who has over 63 years experience in the precious metals markets – first as an investor and subsequently – with over 30 years as a respected member of the industry for guidance and assistance with your needs.

Also, he invites you to tune in to and experience his 26 years of broadcasting with his daily program, The Edge of Darkness at 8:00 p.m. (Eastern Time), each Monday through Friday on Republic Broadcasting Network. – and in addition to educational commentary regarding YOUR financial health and welfare, you will be introduced to a wide variety of subject including YOUR physical well-being and health, your Education (about many topics) … and sometimes just a bit of much needed satire.

Please allow me to introduce myself; I am Jeffrey Bennett, President of Kettle Moraine, Ltd., the parent of Sierra Madre Precious Metals. I have been married for 52 years with two children and four grand-children, a veteran of Viet Nam, student of history (both American and film), and was host for fifteen years of Perspectives on America on the alternative airwaves, covering such subjects as, health and wellness, news, political satire, education and editorial commentary on current events through the teaching of history, and Protecting Your Wealth. In early 2018, I took a several month hiatus to complete some family business but returned to airwaves April 17, 2018). At the age of ten, I sat in a bank-vault in the Citizens Bank of Mukwanago, Wisconsin with my grandfather going through bags of old American Peace dollars, hand-selecting each coin as dated rolls of 20 coins were carefully put together and rolled. Learning of the history of these beautiful pieces of Americana, I asked my grand-father, "Why are we doing this?" to which he replied, "Because someday they are going to do the same thing with the silver in our money that, that (S.O.B.) Roosevelt did with gold in 1933." It took only six-years for his prediction to come to pass at the hands of a disciple of Roosevelt's... and what will a Federal Reserve 'dollar' purchase today - and what will that old 90% Silver Peace Dollar purchase? Although at the age of ten, there was little understanding of the meaning of it all, over the next half-century I became well-versed on the subject matter. During this summer of my education, I began to purchase silver coins as a collector and some small, international gold coins two years later - not an easy feat in the shadow of the Roosevelt confiscatory policies of 1933. Although those policies remained in effect until the mid-1970's, it was not until 1991 that I found that one could make a living providing precious metals and collectible, historic numismatic coins to a willing and concerned clientele. It was also during that year, that I began a relationship with one of the first Trust companies to give the public access to gold and silver as part of an Individual Retirement Account (IRA) - and Kettle Moraine, Ltd., founded in 1995, but have ceased providing service due the the intense change-over of the provider. In November 2011, after a 15 month broadcast on another network, I returned to the airwaves with my then revamped program, Life, Liberty & All That Jazz, and for over a quarter-century, I have been proud to serve the family of listeners of my numerous broadcast programs for physically-held precious metals for investors and collectors alike. On March 23, 2020 I launched my brand new - appropriately named program, The Edge of Darkness on the Republic Broadcasting Network, and thus continue to  remain available to our long time clients and their families. Ah yes - find out what "inter-generational" wealth provision has done for our clients over the past three decades. Don't buy the sizzle of that steak until you understand the cost! In other words, don't buy the bull being dispensed by the 'rare coin' pitchmen until you understand the full story. We, at Sierra Madre Precious Metals, will be proud to serve your needs.
View all posts by admin →
This entry was posted in Let's Get Physical. Bookmark the permalink.