American Gold Eagles, the world’s most popular selling gold-bullion coins, were introduced in 1986, and millions of 1 oz. American Gold Eagles have been sold. Because of their popularity and international recognition, they provide instant liquidity.

Minted at West Point, New York, American Gold Eagles come in four sizes: 1 oz., 1/2 oz., 1/4 oz., and 1/10 oz.. The 1 oz. Gold Eagle coins are by far the most popular and sell at small premiums over the value of their gold content. The smaller coins sell at higher premiums. American Gold Eagle bullion coins are 22 karat gold.

Although we prefer American Gold Eagles (AGE), Gold Canadian Maple Leafs (GCML) and South African Krugerrands (GSAK), and Austrian Vienna Philharmonic serve equally as well. We have found however, that under present market conditions – the 24k Maple Leaf tends to “sell-back” for slightly less than an American Eagle because it’s purity and tendency to be damaged (due to softness), while the Krugerrand generally “sells-back” for considerably under it’s metallic value (spot). However, Maple Leafs, Krugerrand, and Kangaroos are bullion coins that have the desired traits for “insurance” purposes. They are stamped in English, come in convenient, well-known sizes, and sell at relatively small premiums over the value of their gold content.

Keep in mind that market conditions change for each of the mentioned products to a factor known as “supply and demand.”

To meet the demand of investors who seek the purest investment gold possible, in 2006, the U.S. Mint, by the authority of the United States Congress – authorized the mintage of the first pure – 24k (.9999 fine) gold coin in American history – the ever-popular Indian-head/Buffalo design, which like the one oz. American Gold Eagle, retains a $50 face value.

The 1913-1938 ‘Indian Head’ nickel, with the buffalo reverse, is an essential bit of American nostalgia and history. Designed by the American master sculptor James Earle Fraser, it is just one of many enduring images he created. So popular is the Fraser ‘Indian Head’ nickel that, prior to its selection as the U.S. Mint’s purest gold bullion coin, it was released by the U.S. Mint as a $1 uncirculated and proof silver coin in 2001.

Call for the best prices on these highly sought-after gems, whether for “wealth insurance” or to add to your collection. 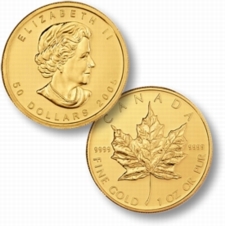 Guaranteed by the Government of Canada and traded in world markets since 1979, gold Canadian Maple Leaf coins have become some of the most desirable bullion coins in the world today. Available in four sizes of, one-ounce, half-ounce, quarter-ounce and one-tenth ounce, all are beautifully struck with a gold purity of .9999. As a government issued gold bullion coin, it was the second to become available, after the South African Krugerrand.

The Royal Canadian Mint pioneered the concept of minting a gold coin without the need for a strengthening alloy in order to produce the gold Maple Leaf in such high purity. Such purity proved to be extremely popular with collectors and investors worldwide. A few years after its initial introduction, the Maple Leaf gold coin was outselling the Krugerrand.

The classic design of the gold Maple Leaf coin is virtually unchanged from its introduction. The bust of Queen Elizabeth II appears on the obverse side of the coin, gracefully aging across various vintage coins in a design by Arnold Machin. Several other small changes can be found. The reverse depicts a single Canadian Maple Leaf, the national symbol of Canada. The finely detailed design has a proof-like strike. 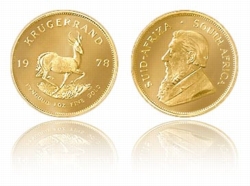 The Krugerrand was first conceptualized in 1964 as a legal tender bullion coin marked only with its weight in gold. The coin was created as a means for the private ownership of gold bullion by the general public and was first minted at the South African Mint on July 3, 1967.

Gold Krugerrands were marketed so successfully that by the early 1980s they held an 89% market share of the entire gold bullion coin industry. The unique concept behind the 1 oz gold Krugerrand was that the coin’s value was dervied solely from the current value of gold. As a result the coin was not marked with a rand value.

Krugerrand gold coins are legal tender. Its composition was designed to be more durable. Its purity is .9170, or 91.7% gold, with the remainder being copper. Copper alloy gold coins are more resistant to wear than their 24 karat counterparts. The coin also appears closer to an orange shade than coins alloyed with silver. Each 1 oz coin weighs 33.93 grams (consisting of 31.1 grams pure gold and 2.83 grams copper). 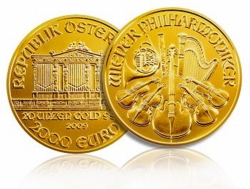 Backed by the government of Austria and minted by the Austrian Mint in Vienna, the Vienna Philharmonic is a widely owned gold bullion coin.

Minted at the historic Austrian Mint in Vienna, internationally famous for producing exceptional gold coins for more than 800 years, the Philharmonic is one of the most gorgeous and coveted of all modern gold bullion coins. The worlds best selling Gold coin in 1992, 1995, 1996, the Vienna Philharmonic gold coins are struck in 999.9 fine gold. 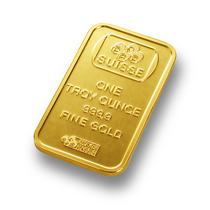 Offered at a lower premium over the spot price than gold bullion coins, gold bars provide investors with a convenient and cost-effective way to own this precious metal.

While we strive to maintain a robust inventory of the gold bars listed, we are unable to guarantee delivery for a specific individual brand of gold bullion bar. As a result, the exact brand of bar(s) shipped will be determined by inventory at the time of shipment.

~ Market Value of Bullion Products~
Bullion related pricing will move up or down with the daily price of the individual metal-based product.. The spot price of all precious metals is reported every business day in all major media outlets.

NOTE: Minimum purchases may be required for Bullion products. Due to the volatility in the markets, bank-wire transfer is the preferred method of payment. 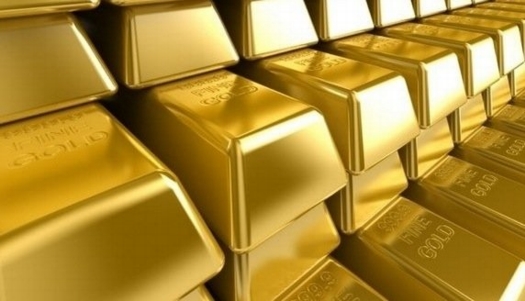